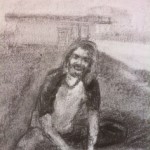 Although squatting has been forbidden since 2010, there are still some people who break into abandoned houses in order to find a home to live in. Three people that used to live in Spacecamp, a former squat at the Brielselaan (I wrote earlier about) are amongst these people. After they  were evicted and the windows of Spacecamp where nailed shut with thick, cheap panels, they reached for  their crowbars and headed for the streets of Rotterdam. In search of a new home, forgotten by owner and neighbourhood. But how do you do that; squatting a new house? What risks are there and why would you want to take them? Vers Beton interviewed them.